[I don’t fully understand the operation or universe of potential or preferable applications of “Counter-mapping,” but then again, sometimes I have trouble figuring out how to apply GIS tools. It does seem, however. that these concepts could be useful in addressing the interface between local, artisanal users of natural resources, such as fishers, and new conservation needs and programmes. There is a useful list of references at the bottom of this article.]

Sara is a 32-year-old mother of four from Honduras. After leaving her children in the care of relatives, she travelled across three state borders on her way to the US, where she hoped to find work and send money home to her family. She was kidnapped in Mexico and held captive for three months, and was finally released when her family paid a ransom of $190.

Her story is not uncommon. The UN estimates that there are 258 million migrantsin the world. In Mexico alone, 1,600 migrants are thought to be kidnapped every month. What is unusual is that Sara’s story has been documented in a recent academic paper that includes a map of her journey that she herself drew. Her map appears alongside four others – also drawn by migrants. These maps include legends and scales not found on orthodox maps – unnamed river crossings, locations of kidnapping and places of refuge such as a “casa de emigrante” where officials cannot enter. Since 2011, such shelters have been identified by Mexican law as “spaces of exception”.

This kind of work is an example of the growing field of counter-mapping. The title of a seminal paper in the field, Whose Woods Are These?, gives a succinct summary of what is involved. The paper’s author, Nancy Peluso, studied land ownership in the forests of Kalimantan, Indonesia, just as the government and the timber industry were mapping large tracts of land with the purpose of opening them up to logging and mineral exploration. Not surprisingly, where the official maps were blank, counter-maps from indigenous people told a very different story of generations of use, as well as customs and disputes among and within different tribes. Woods are, of course, particularly interesting as from time immemorial they have been the refuge of outlaws, bandits or whoever the state deems to be “other”. In Haiti, slaves typically gathered in the forests above plantations, prior to the birth of the first black republic.

Travelling through tree-covered areas is a slow and arduous process, as is travel through politically unstable areas. Scale on an orthodox map is uniform; counter-maps can represent psychological as well as physical distances that are rarely linear or uniform. In the town of Duvergé in the Dominican Republic, I once interviewed a Haitian migrant who had dealt with civil unrest, a long mountain chain, forests, police checkpoints and clusters of militias (chimères) on his journey across the border. Although geographically his home town was only 177km away, he was psychologically about as close to home as a Londoner is to Murmansk.

Counter-mapping’s ability to capture this fragmentation also makes it a useful tool for documenting physical transformations wrought by climate change. In the Arctic, melting sea-ice is opening up the Northwest Passage to the possibility of greater transcontinental shipping. Questions of sovereignty over these waters are pressing, and the traditional function of maps has been to impose the stamp of a crown on vast swaths of the Earth. In the Arctic, as in Africa and Asia through the 19th century, it suited many Europeans, Russians and Americans to think the land was empty before they arrived. In the mining town of Labrador City, there are curiously named lakes: Tanya Lake, Beverly Lake, Carol Lake. Curious, until you learn that Carol was the wife of the chief geologist of the Iron Ore Company of Canada (IOC). The names date from the 1950s. 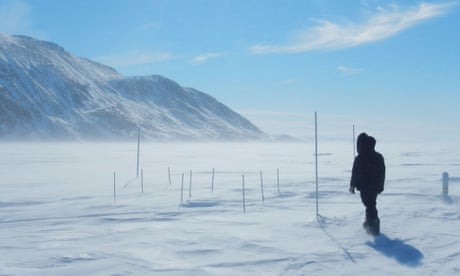 In reality, there are few empty parts of the Earth, as is usefully shown in the Pan Inuit Trails Project, developed by Prof Michael Bravo of the Scott Polar Research Institute at Cambridge University. Using archive and published material as well as fieldwork and interviews, Bravo and colleagues created an interactive map of Pan Inuit trails that crisscross vast territories of the Arctic. Knowledge of these trails has been passed down through generations of Inuit voyagers through a combination of maps and storytelling. An earlier explorer of the Arctic, William Brooks Cabot, once noted in relation to the maps indigenous people drew for him: “Like all Indian maps, they are made only to travel by. For this purpose, however, their maps are often better than ours. One needs to be used to their method.”
Counter-mapping often pays greater attention to “their method” than orthodox mapping. There are more than just Cartesian coordinates in the world. Detailed knowledge of the thickness of ice, places of shelter and predators are engraved in Inuit stories. Indeed, the naming continues; within the great Rapa valley in Sarek, the Swedish wilderness, is a small area recently given the name Rovdjurstorget (Predator Square) because the tracks of all four large predators that exist in the wild in Sweden (bear, wolverine, wolf and lynx) have been found there.

And if a scientist frowns at the mention of storytelling, just remind them of the names of places to be found in anatomical atlases of the brain – the amygdala (the almond) , the hippocampus (the seahorse) , the globus pallidus (the pale globe) . Mapping is eternally linked to stories, and counter-mapping acknowledges the use of more than one knowledge base. It also has the possibility to counter the naïve, sometimes malign, simplicity of state lines. Arctic people in particular know a thing or two about these lines – the Sami were often burdened with paying taxes to three nation states at a time.

One of the fundamental overlaps between the counter-mapping of the Arctic and the journeys of migrants is that in both cases there is no single scientific or technical solution to the problem at hand. Alleviating the problem depends as much on ethics as equations, and Inuit people have different ethical obligations to the Arctic to IOC geologists. The answer to the question “whose woods are these?” is not singular. Counter-mapping at least helps us to give more weight and representation to customs and claims on the land that have traditionally been ignored.

Human Rights of Migrants and Other Persons in the Context of Human Mobility in Mexico, Inter-American Commission on Human Rights, 2013

Peluso, NL, Whose Woods Are These? Counter-Mapping Forest Territories in Kalimantan, Indonesia, Antipode, 1995

Rompkey, B, The Story of Labrador, McGill-Queen’s Press, 2005

Where do we seek solutions?

Small Islands in the
Caribbean.

The Potter Fund for NatureTech.Solutions is a US-based non-profit foundation, administered by the Community Foundation of the Virgin Islands. Contributions to support innovation in resource management in the small islands of the Caribbean can be made by check, payable to
Community Foundation of the Virgin Islands,
PO Box 11790,
St. Thomas, USVI 00801-4790,
USA.

Memo Field on the check: Potter Fund for NatureTech.Solutions

Donate thru the CFVI web site